Revelation 17: The Image of the Beast Satan’s Church, the Whore

Revelation 17 is not a prophecy; it is commentary or information needed to understand scenes in the Book of Revelation.  Commentary is frequently not given in chronological order. The information in Revelation 17 is used to understand ‘analogous language’ in other prophecies. For example: the leopard like beast of Revelation 13:1-8 has ten horns – the angel tells John that the ten horns are ten kings {Revelation 17:12}. We know the leopard beast has civil power because horns on any animal are controlled by the head. The woman is shown riding on the leopard like beast because she is controlling Babylon {the leopard like beast} like a person riding a horse. Satan, masquerading as Jesus, has consolidated all religions in to One Church called the whore. She, the whore, forces everyone to sell their souls for a ration of food and a little money – like a prostitute sells her body for money or be killed. In the end the ten kings and the religious wicked hate the whore, because Satan’s kingdom falls apart at the beginning of the plagues.

The religious wicked suffer terribly from the sores, dead oceans turned to blood of dead men, and blood to drink. The words: ‘they will eat her flesh an d burn her with fire’ means they are literally gnashing their teeth hurling out words of hate that burn like fire. The religious wicked and the kings see that they have been willfully deceived, but they have no love for God or the truth. 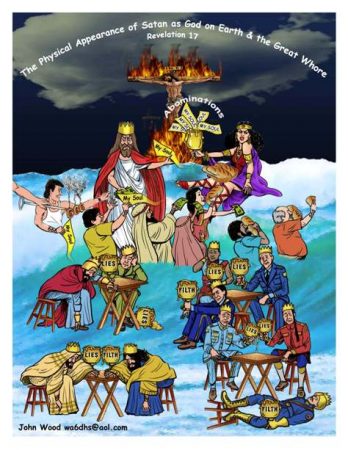 “At that time Michael, the great prince who protects your people, will arise. There will be a time of distress such as has not happened from the beginning of nations until then. But at that time your people—everyone whose name is found written in the book [of life] – will be delivered.” – Daniel 12:1,…

Daniel 8: The Physical Appearance Satan & the Judgment Daniel 8 is difficult for those that do not understand that God inserts large ‘Gaps of Time’ between verses with absolutely no indication in style of writing. This prophecy begins with the Ram, Medo-Persia, in 538BC, and then jumps more than 2,300 years to the appearance…

“Don’t let anyone deceive you in any way, for that day [the Second Coming] will not come until the rebellion occurs and the man of lawlessness is revealed, the man doomed to destruction.” (2 Thessalonians 2:3) The month of December is renowned for its primary holiday. Even though Christmas is a manmade holiday, Christians can…

Daniel 7: The Moral Deterioration and the Sovereignty God In Daniel 7 God shows the moral deterioration of the world by using beasts starting with the Lion in 605 BC, then the Bear, in 538BC, that is a cruel relentless carnivore. Next in 331BC, the very fast Leopard is fixated with conquering kingdoms. Then last,…

The Seven-Head Beast Is Also Called Babylon Shortly after the horrific destruction caused by the first four trumpets, the religious and political leaders of the world will create a crisis government to appease God’s wrath. This government is the seven-headed beast of Revelation 13:1. Among other names, the book of Revelation calls the beast “Babylon”…

Login with your Social ID

Learn about Bible prophecy in the news - SUBSCRIBE to The NewsWatch today! →
--View Sample--