Daniel 7: The Moral Deterioration and the Sovereignty God

In Daniel 7 God shows the moral deterioration of the world by using beasts starting with the Lion in 605 BC, then the Bear, in 538BC, that is a cruel relentless carnivore. Next in 331BC, the very fast Leopard is fixated with conquering kingdoms. Then last, in 168 BC, God creates a Star Trek monster that is worse than any animal ever created to reflect the moral degeneracy of the last kingdom, Pagan and Papal Rome. All the prophecies of Daniel and John the Revelator occur in the Mediterranean area of the world as a representation of what happens to the entire world – ‘a part representing the whole’. Pagan Rome was not satisfied in just killing criminals; they tortured them to death like the two thieves that were crucified with Jesus. Next, pagan Rome becomes Papal being worse than pagan Rome because she tortured and burned people in the name of religion. Thus Papal Rome slandered the Wonderful name of our loving God, by slaughtering millions that chose to worship God by their different beliefs. The papacy burned William Tyndale for printing the Bible in English, saying this is God’s will. Last but far from least, Daniel 7 reveals that God Almighty, the Ancient of Days, is in complete control even though He has allowed freedom of choice for thousands of years. In 1798 He sent Napoleon to put the Pope in prison bringing the horrible persecution to a n end; thus revealing God’s absolute Sovereignty. In the near future, the great tribulation will begin and the little horn of Daniel 7, the papacy, will reappear and be given civil power to persecute as she did in the past. In verse 11 God’s shows He is in complete control; He burns the beast at the 2nd coming. 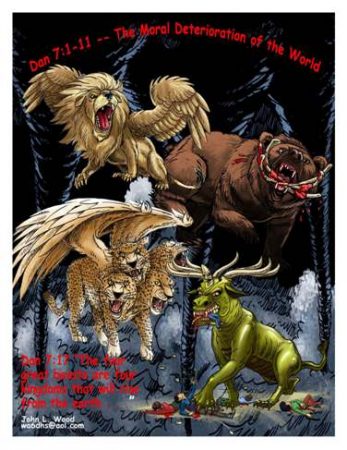 “Dear children, this is the last hour; and as you have heard that the Antichrist is coming, even now many antichrists have come. This is how we know it is the last hour.” – 1 John 2:18 Section I – The Symbols As we proceed through the book of Daniel, the prophetic matrix will continue…

“You say, ‘I am rich; I have acquired wealth and do not need a thing.’ But you do not realize that you are wretched, pitiful, poor, blind and naked. I counsel you to buy from me gold refined in the fire, so you can become rich; and white clothes to wear, so you can cover…

The Four Beasts of Revelation Even though I (John Wood) have titled this “The Four Beasts’ there are only two bad ones. The devil is called the dragon, the lamb-like-beast, and the false prophet. The devil’s names change with origin, time, and behavior. When Satan is doing his deceptive work from the spirit world he…

“At that time Michael, the great prince who protects your people, will arise. There will be a time of distress such as has not happened from the beginning of nations until then. But at that time your people—everyone whose name is found written in the book [of life] – will be delivered.” – Daniel 12:1,…